From Poland to Brazil? 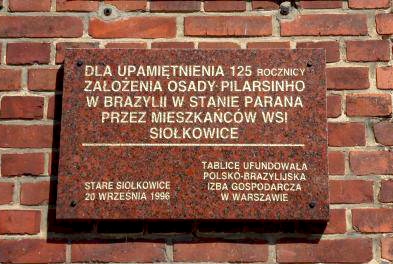 Siołkowice – a village situated in the south-eastern Poland is a quiet place inhabited by ordinary people. At first glance it does not seem anything special, just an average Polish village as many others. However, when we try to dig deeper in the history we might discover the astonishing facts. To sell all properties, leave relatives and emigrate to another continent one must have been brave, desperate or insane.
It is hard to find anything about a person who initiated a process in the local archives. Nevertheless, the elderly inhabitants admitted to had heard the mentions about Sebastian Woś, who had left Silesia in 1867 and headed to South America in order to avoid the military service. In Brazil he settled in Blumenau – a German colony and started working in a local school. He changed a profession several times and finally moved to another state – Parana where he continued living known as Edmund Saporski.
In the years 1869-1871 32 people from the area of Opole emigrated to Brazil being mentored by Edmund Saporski, who insisted that they should settled in Parana due to the mild climate. In 1875 26 families, in total 111 people claimed to be dismissed from the Prussian citizenship due to their plans to emigrate to Brazil. In 1876 many families from Siołkowice, Popielów, Kaniów and Lubienia were reported to be keen on emigrating to Brazil but not all of them succeeded.
In the beginning of 20th century the priests from Silesia emigrated to Brazil to work as missionaries in the area where east-European resided. Among well known missionaries we can recognize: a nun Gerardina- Maria Wodasz and a father Jan Pogrzeba. Polish immigrants settled in Pilarsinho close to Curitiba. In 1972 the Polish colony consisted of 262 people – 52 families. One year later – surprisingly – there was created another Polish settlement – Abranches. Few years later 550 families from the Western Prussia moved to the area of Polish settlement in Brazil. From Poland emigrated mainly large and poor families with little prospects for the future. In 2013 the group of Polish descendants from Curitiba visited Stare Siołkowice to visit the homeland of their great ancestor Sebastian Woś.